Did you ever read The Accidental Tourist by Anne Tyler? In that book the protagonist, Macon Leary, is a writer of travel guides for people who hate to travel. He guides them how to travel and still feel like they are at home. For example, the French put extra pickles and onions on their Whopper Burgers, so you have to scrape some off. Some who travel seek fine wine. Macon Leary's travel guides show you where to buy pasteurized homogenized milk. Quirky, but adorable, no? YES. (Blah blah embrace change blah blah, bookworms.)

I'm  sorta the Accidental Camper, in that I'm not super fond of camping and I want to pretend I'm at home. I am super fond of my husband and kid, so I do go 4 or 5 times a year. BluntMoms published a little piece I wrote about that. If you're like me at all when it comes to camping you're going to need these tips.

Here's a picture of three of my kids lounging around reading comic books in the air conditioning when we set up a tent in the living room. LIKE YOU'RE SUPPOSED TO. I totally have happy feet in this photo. 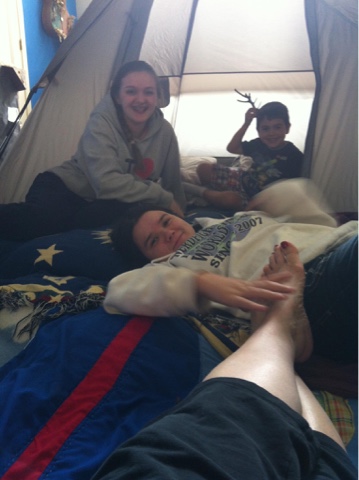 *We Gotta Get Out of This Place - The Animals
Posted by Tonie at 3:30 AM No comments:

*and so she woke up, woke up from where she was lying still, said I gotta do something about where we're going 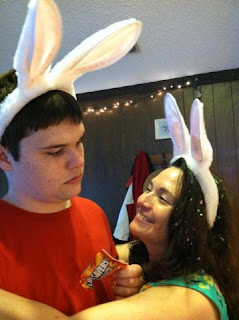 Almost four years ago we put Griffin in a group home and it was the only thing left to do and also one of the hardest things. He was only 17 and it felt way too young. I had planned this for him at 21. At the time I was looking for accounts and personal narratives so I would feel less alone. There were very few.

The Mid has published my story, and you can read it here

It's not an easy read, but here on the other side and years later I know it is a good thing for him, not just the rest of us. Also, it wasn't all bad. Here is a few seconds clip of Jeff and Griffin telling a joke from the year before we placed him, which was a very hard year.

I can highly recommend an elementary school talent show on your lunch hour.

My kid played a Jackson Browne song on his viola - because he's adorable and awesome. 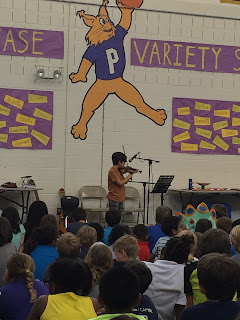 Then later he played vaudeville style viola riffs while two of his friends told jokes.
OH and a tiny peacock told jokes. Really.
OH and a totally wonderful kid OWNED the accordion.
OH and a wee girl in glasses demonstrated her kuh-rah-tay!
OH YEAH, and the principal? He started the whole thing off with a "country song his pappy sang to him" that he played on the dobro. What was it you ask? "Shake it Off" by Taylor Swift. 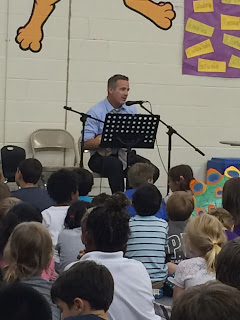 Surreal and hilarious. Not like that one time when I was in a parked limo and the Elvis impersonator across from me started singing the theme song from the Mary Tyler Moore show and then was joined by a guy in a hard hat who stuck his head in the window, but, you know, right up there.
This beat kitten and puppy and platypus pics for sure. Yay!