*it's hard to know when to give up the fight, two things you want will just never be right

I was so happy to be any part of this group, and this show. Here's one of mine.

Shirt
Obsessed with the sweatshirt - Hanes - baby blue,
slightly too small and cuffs of sleeves well chewed
my son wore it every day - he of exuberant nakedness never took it off in daytime even after hours of jumping in the humid air on the trampoline,
the cumin smell of children's sweat ground deep in.
At night he rolled out of its blue safety and slept with it clutched in his chubby fist...
me waiting each night for him to fall deep enough asleep that I could pry it damply loose,
then staying up to wash and dry and put it back.
I throw it away - afraid to pack it away because I know I will be weak
and three weeks go by
and he still begs "shuht shuht shuht shuht shut?" all the way home
the staccato repetition in little boy robot voice begging by numbers, by quantity, if not by tone,
"shuht shuht shuht shuht?"
and he doesn't give up either, he checks all the places he can check, opens every cabinet destroys bags packed with folded winter clothes
"shuht shuht shuht shuht?"
me the chastened mama patrol trailing behind and repacking, tidying, replacing order
relentless in his driving obsession he checks on top of the refrigerator in the linen closet, every suitcase in the house
"shuht shuht shuht shuht?"
Finally way too small it has to go.
By now it has a name in his limited vocabulary "shirt" means only this shirt...and sounds like "shuht" since he doesn't speak very well, my son (and still I am grateful remembering the 6 years he didn't speak at all)
6 years later in a store, buying school clothes for him to take to his group home,
I am pretending to be fine and then I am pressing hard on my chest
holding the sudden starburst of pain at the sight of a rack of sweatshirts.
I want to buy him an armload.
Hanes. baby blue.
I want to bring him home - my broken boy who screams and fights and bites and beats with man sized fists.
His mystifying and relentless obsession now his fragile brother, so even though he is our child he can’t live with us,
My heart stretches thin. shuht shuht shuht Between us a frayed wire. shuht shuht shuht. A broken bridge. 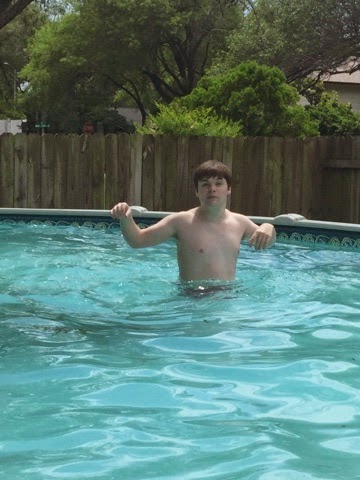 We had a good visit with Griffin this weekend - longer than usual to make up for last weekend. Griffin was happy for the bit of sunshine we had and played in the pool quite a while.

Right now I have my Marnie here, (my dear friend since 1990) and it makes me so happy. I have a few days off work to spend with her and that blisses me out so much.

What I'm Reading: Couldn't really get into The Year My Mother Came Back, I gave it up. HOWEVER, oh you guys, I just finished Everything I Never Told You by Celeste Ng and I don't even know what to say about it. It's a brilliant debut. This poor dysfunctional family struggling after the oldest daughter goes missing and is found dead will find the tender spots in your heart and they will squeeze them out.

What I'm Listening To - Harrison and I are still listening to Ready Player One by Ernest Cline, read by Wil Wheaton and it's so good. Long commutes are a treat.

What I'm Watching - Got to see the Age of Ultron - you know, for me it delivered. It's a very enjoyable popcorn flick. Game of Thrones. Series finale of Mad Men on deck. DON'T TELL ME ANYTHING.

*Rain by Patty Griffin
Posted by Tonie at 8:51 AM