When our four older kids were younger, especially in the years when Harrison was an infant and toddler, life was pretty intense. The year after Harrison was born we had Dylan in high school, Madison at a magnet elementary school, Griffin at the regular middle school, Cassidy in elementary school, and Harrison in pre-school. After school Griffin and Dylan were bused to the same city sponsored after school care for kids with disabilities, Madison took the bus home, and Cassidy had ballet most afternoons, so everyone except Madison had to be picked up - unless she stayed late to work on a project in which case she too needed a ride home.
We had a pretty structured system to allow us to do the high level of hands on care needed to get our three boys out the door, and guide the girls, as well as get ready for work.
Evenings were also pretty intense, with ballet, possible other after school activities, homework, dinner to be prepared for kids with very different dietary needs, and some time hopefully for us to connect as a couple. Often Griffin's behavior issues would consume us both completely.
The four older kids that year were all going to their other parent's house every other week - so we were able to maintain a pretty high standard because we had every other week to catch up all the stuff we couldn't get to, with just one little infant at home.
These days it's a very different world. Dylan still lives with us every other week, but Madison lives with her other parents, Griffin lives in a group home and Cassidy is mostly away at college. Harrison is still home because he's in elementary school.
What that means is the cracks and crevices in our lives where Jeff and I were able to find a tiny space to create have cracked wide open. Most Sundays we gather with our framily, and make wonderful food, and play music, and talk. The kids run around. In the summer we are in and out of the pool. Jeff has been posting a poem a day on Facebook this month. I was honored to be gifted with a beloved but very broken viola by a talented musician and I painted this: 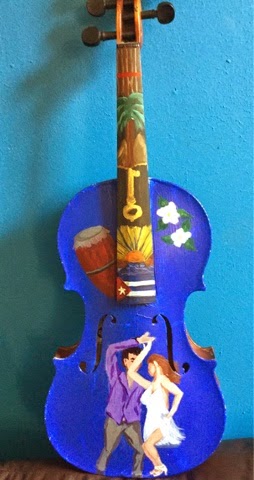 which isn't too surprising if you know this is what I have next to my chair: 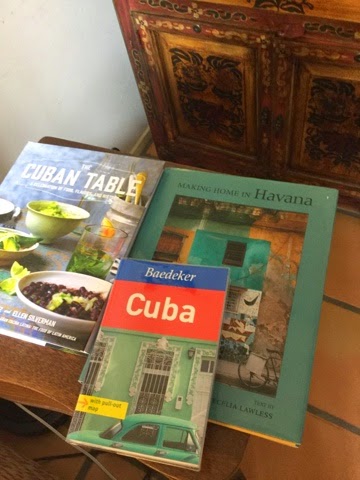 I have this blog, and it seems like I have so MANY cool projects and things I want to do. Jeff too. We may even go back to the slam once in a while. I am so lucky to have found him, perfect, and waiting for me. We still send each other love notes every day. I long for him to get home if he's later than I am. First thing we do is catch up our days, last thing we do at night is kiss and whisper our love and devotion.
I'm reading - All the Cuban books! and The Paris Wife by Paula Mclain - fictionalized version of the story of Hadley Richardson, Ernest Hemingway's first wife. Pretty fascinating stuff.
I'm listening to - Peter and the StarCatchers by Dave Barry and Ridley Pearson and narrated by the brilliant Jim Dale. This was written as a prequel to Peter Pan and is quite well done!
When Harrison's not in the car I'm listening to - Jason Isbel's Southeastern album...again. Love his dark and desperate soul.
I'm watching - Vikings, Agents of S.H.I.E.L.D., the Flash because you can't take the nerd out of this girl, or the sky from me.
*Time in a Bottle - Jim Croce
Posted by Tonie at 5:01 PM